This series of pages are about my a Custom 1993 Chevy C1500 Indy Pace Pickup Truck and my customer experience with the process of removing the stock 350 V8 with an after-market Whipple Supercharger (already installed on the engine when I purchased the truck), and replacing it with a Blueprint Engines 383 TBI Stroker (BP38302CT).

After doing some online research in late 2017 I contacted Blueprint Engines about their 383 Stroker advertised to be designed to replace the stock 350 V8 in my specific year and model truck. I was assured that this was indeed the case, and that all I needed to do was use all the stock TBI, sensors and other components with this engine. The engine was advertised to deliver increased horsepower and torque giving this truck the performance it probably should have had. Blueprint Sales told me that the purchase included a new PROM chip to install on my ECU that would enable my stock ECU to work with the new engine and take advantage of its design and performance. Based on this conversation, I placed the order ($5,000 to $6,000) directly on the BP website on DEC  12, 2017.

By mid January 2018, I had received no communication from Blueprint Engines regarding my order status, or shipping date, etc. So, I contacted them again and discovered that they had not yet even begun to build the engine! They were apparently waiting on some key components. They apologized for having neglected to let me know. Because of this poor communication, and the bind that it put me in, I had to get the President of the company involved along with a specially appointed customer service rep, to track the build, shipping and delivery schedule and communicate with me directly as to how things were progressing. This was really nothing more than what you would think any normal business would do for a customer. I also had to scramble to adjust my vacation schedule and the reservation I had made at my local mechanic shop for the engine install.

The Blueprint Engines “383 Stroker” engine arrived on FEB 20, 2018 at my mechanic’s shop in a wooden crate via Federal Express without any damages. It was quite exciting to open it and see it for the first time!

One of the reasons I made this purchase was because Blueprint Engines claimed they had already built many of these engines and dyno tested them to verify its performance. I was definitley looking forward to the increased horsepower and torque! 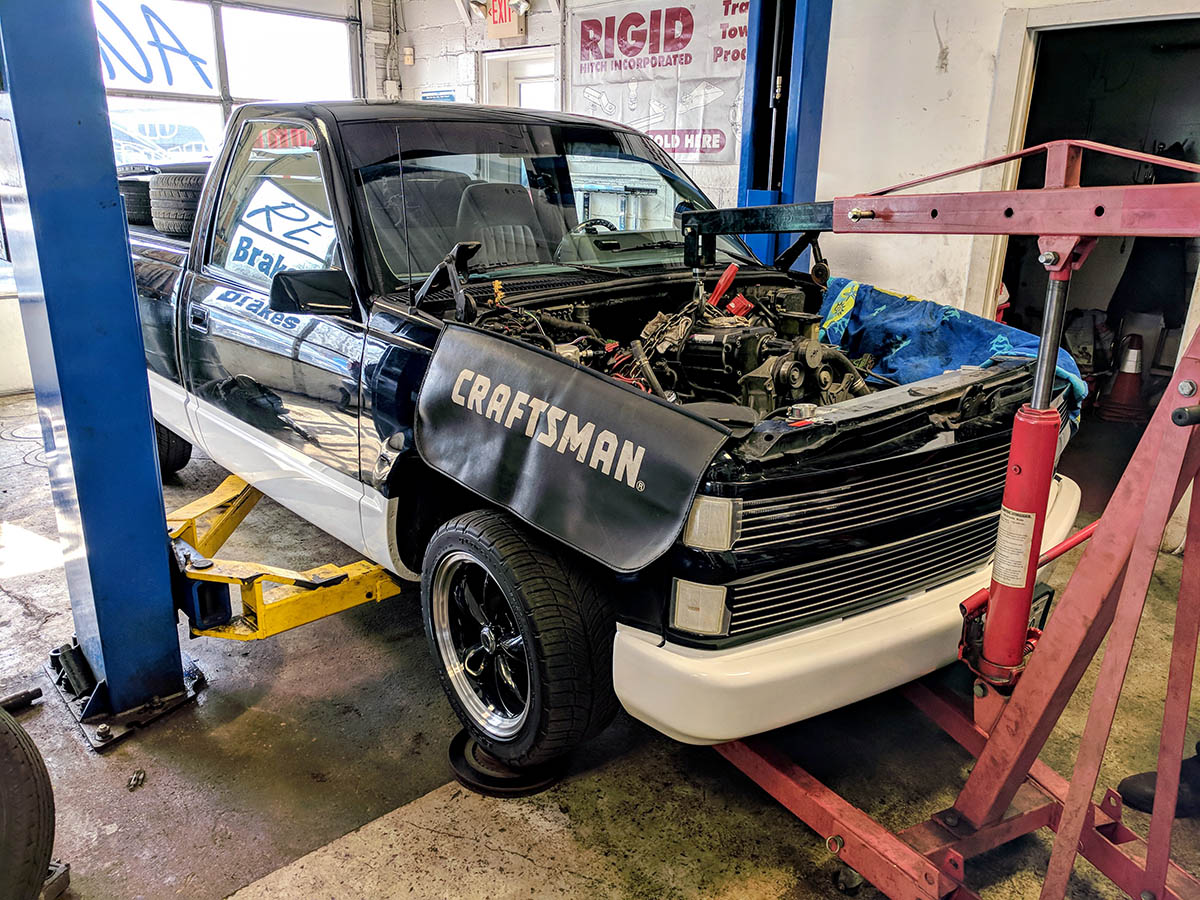 On February 27, 2018 we were ready to remove the OEM 350 V8 that had an aftermarket Whipple Supercharger on it.

The 350 V8 with Whipple Supercharger was then mounted near the truck so we could remove necessary stock parts to be used for the 383 Stroker installation.

With the 383 Stroker on an engine stand, the additional engine parts were laid out and systematically attached to it, getting it ready to drop into the empty truck engine bay. Most of the new parts were purchased from Summit Racing (water pump, fan clutch and fan, headers, gaskets, sensores, etc.) 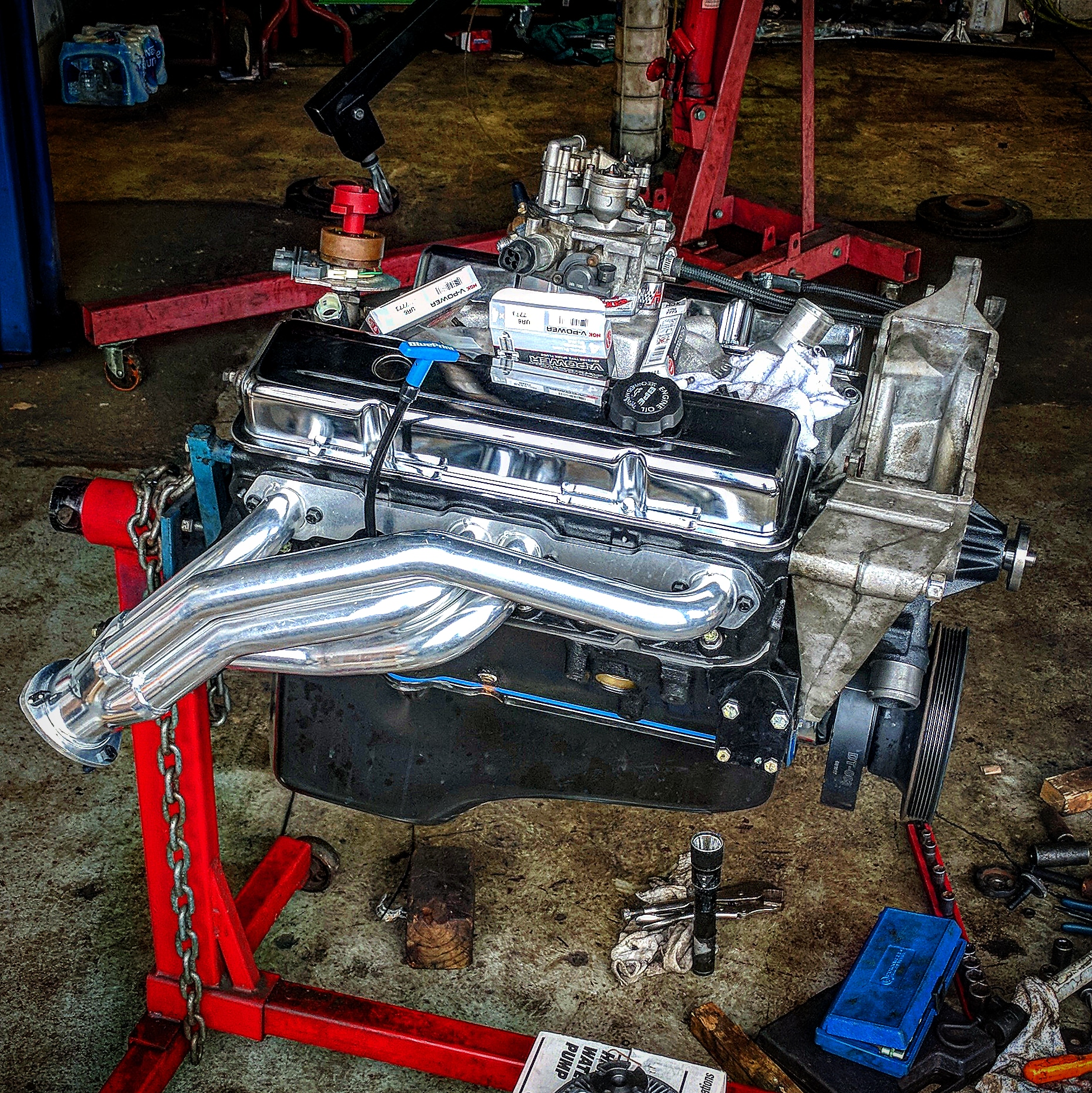 The 383 Stroker on the engine stand with many additional parts added including the modified throttle body (TBI) and Flowtech shorty headers. The TBI upgrade parts were purchased from R.V. Morse Machine (http://rvmorsemachine.com/) 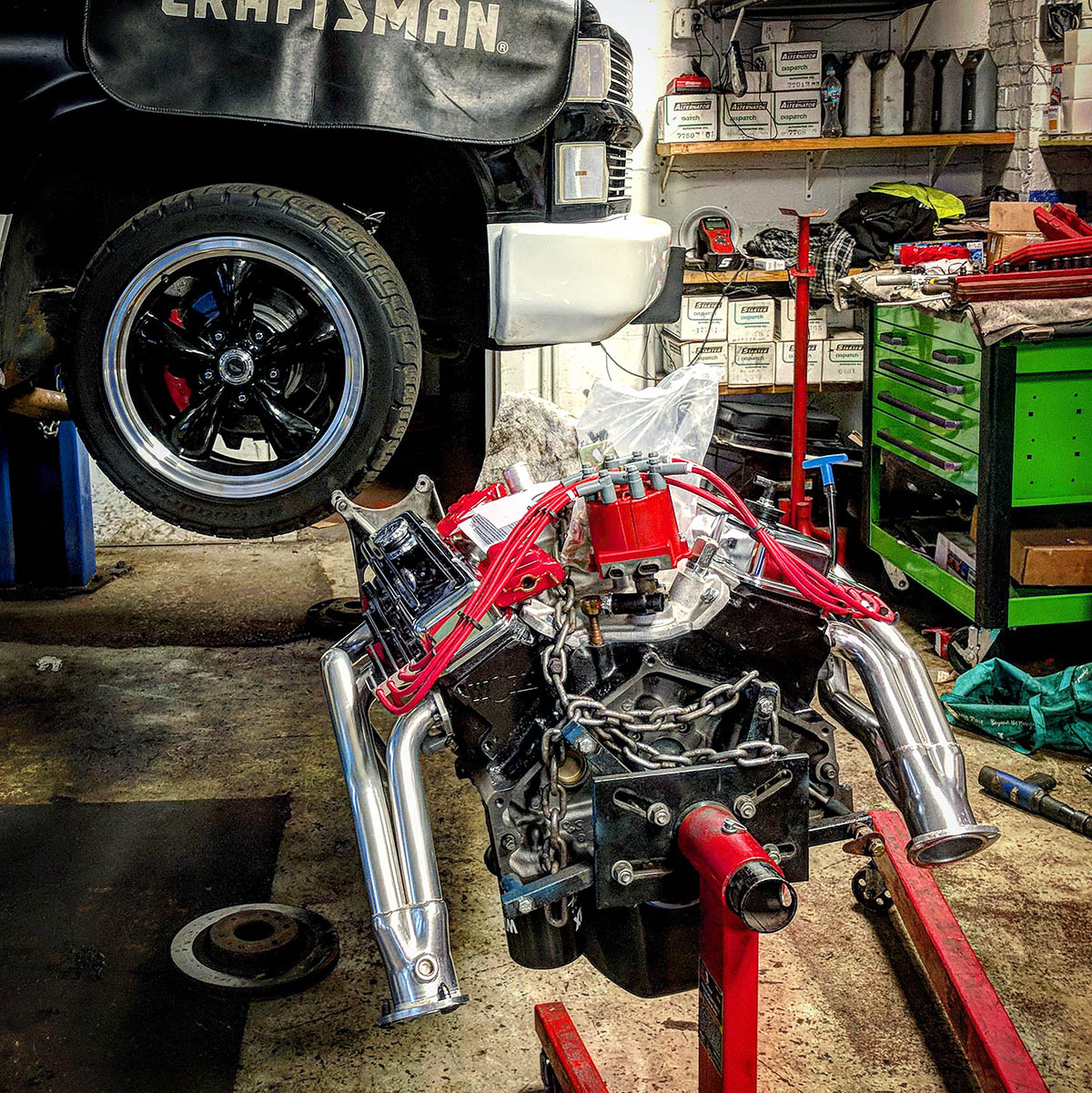 The Blueprint Engines 383 Stroker was finally ready to be hoisted and installed in the empty engine bay on March 1, 2018. 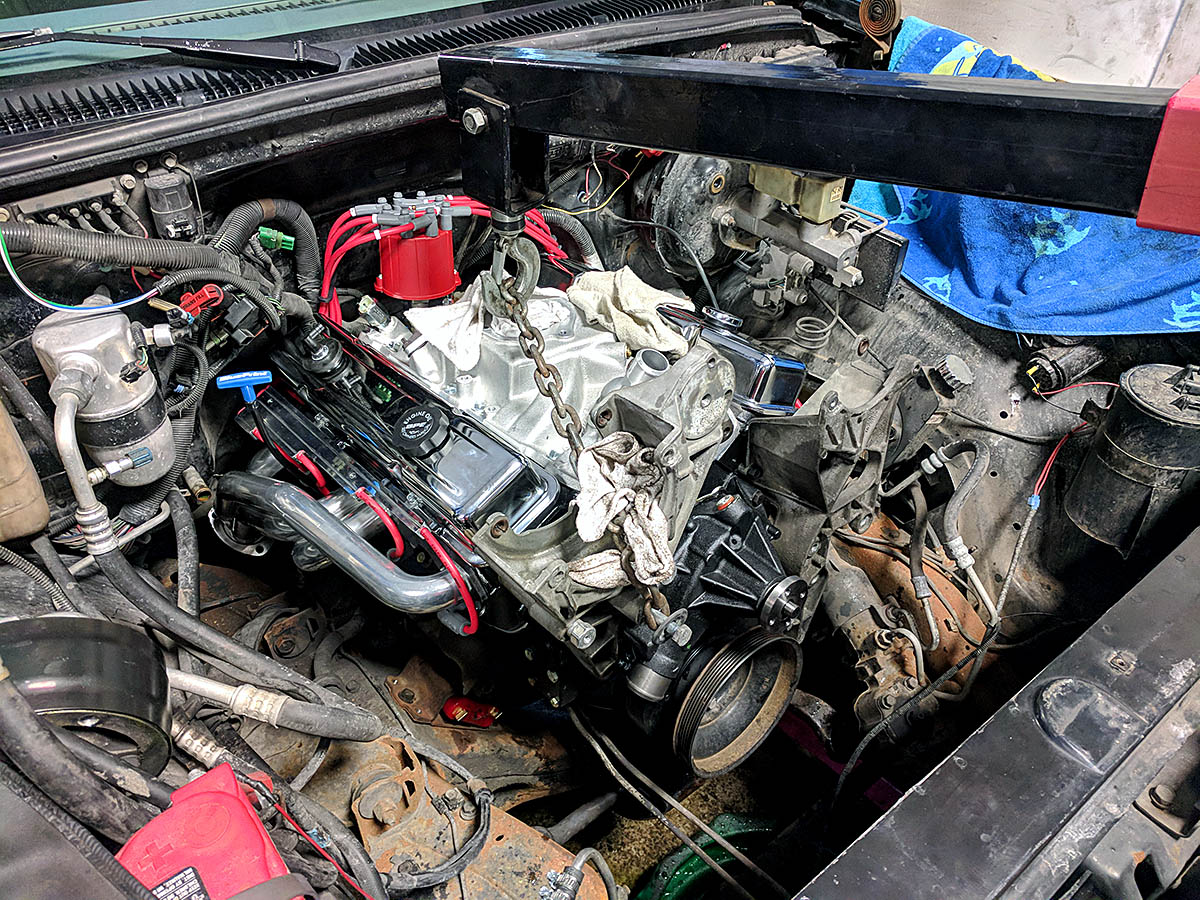 The Blueprint Engines 383 Stroker being lowered by a hoist into the engine bay. 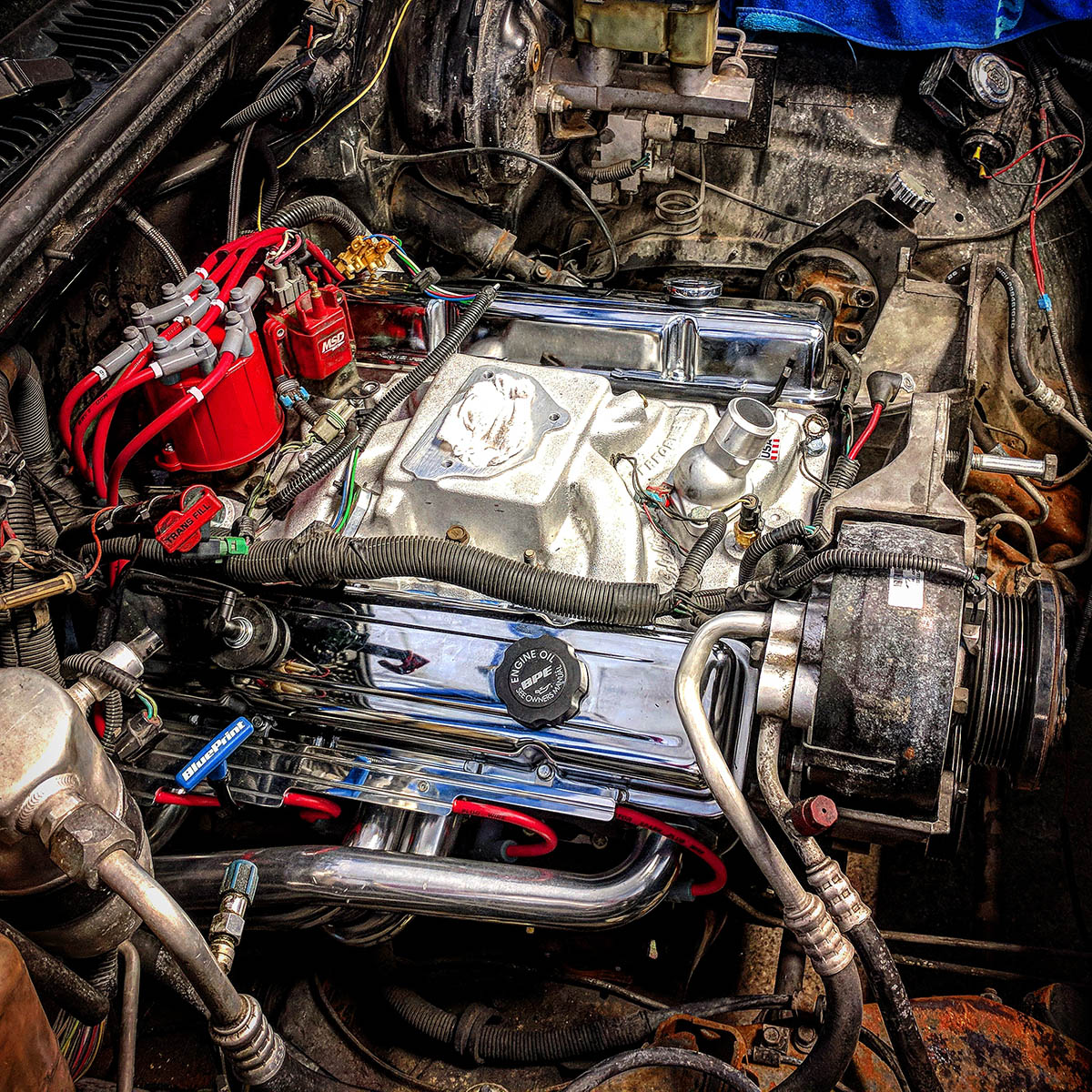 The 383 Stroker dropped in place, mated with the 4L60E transmission and mounted on new Energy Suspension motor and transmission mounts.

First start of the 383 Stroker in my Chevy Pickup 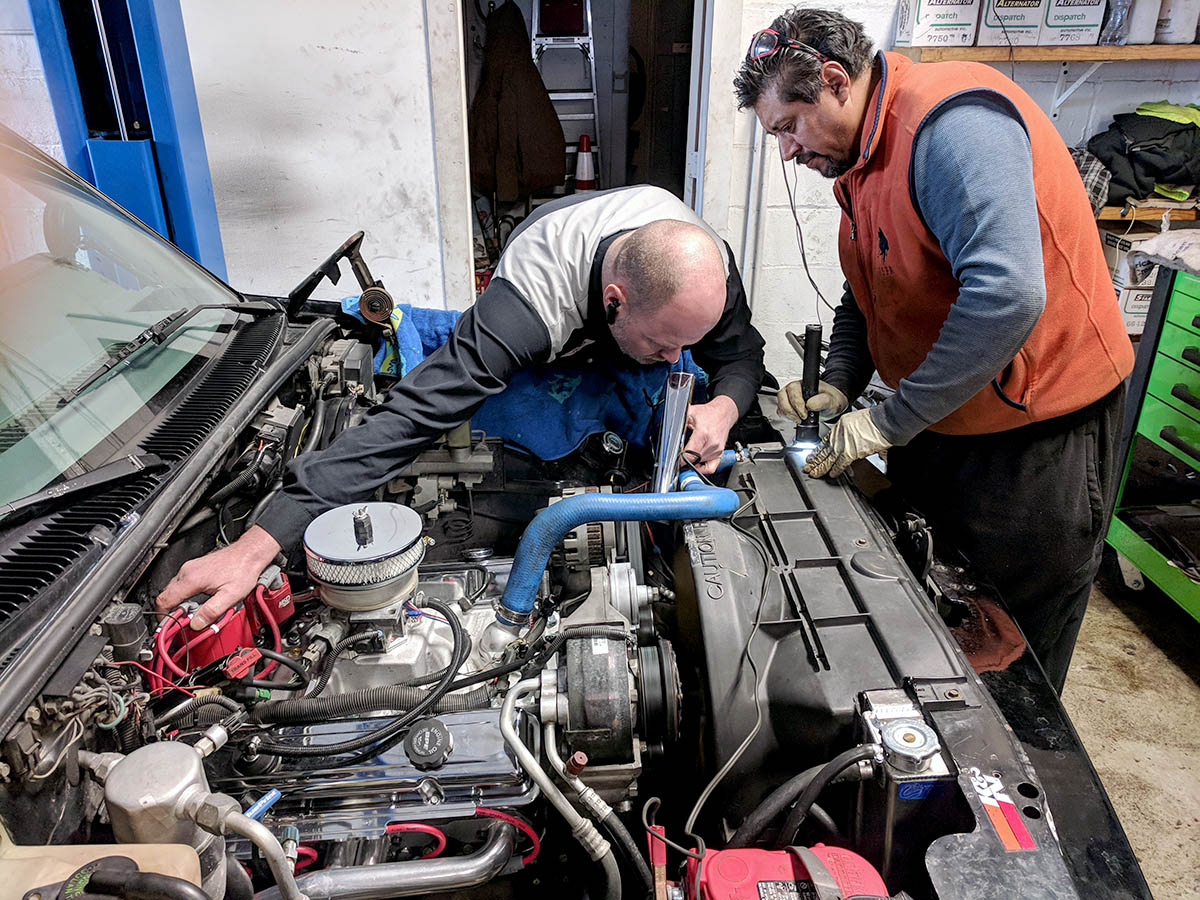 On March 7, 2018 we were able to start the engine for the first time and perform inital timing! It was a very exciting day!

Here is a short walk-around video of the 1993 Chevy Pickup idling with the Blueprint Engines 383 Stroker freshly installed and running with the recommended break-in oil.