On this page, I share my experiences with this popular electronic fuel injection system, which was recommended to me by Blueprint Engines, and included in the warranty replacement on my 383 Stroker engine.

The first thing I need to say is that it is a vast improvement over the previous stock OEM TBI system that was on the previous Blueprint Engines 383 Stroker. I wish they had recommended this option to me the first time I purchased and installed this engine. I am generally very happy with the added performance this setup has provided.

Like many aftermarket products, there can be issues that pop up from time to time. The first one for me was that the first Holley Sniper EFI system that came with the rebuilt warranty 383 Stroker, did not work properly and could not be tuned. Gratefully, Blueprint Engines sent us a replacement system that worked as advertised and was tuneable. We returned the faulty unit and Blueprint told us they would send it to Holley for quality control purposes. I don’t know what the actual problem was, but my mechanic and I assumed it was somewhere within the computer.

The second issue is one I have been struggling with for many months and only today (July 18, 2021) think I may have finally solved it! The symptom was that often while driving at an RPM speed above 2,000, I would let up on the throttle, and the truck would seem to want to stay at that speed, instead of cycling down. Often I would have to “blip” the throttle to get it to cycle back down to idle speed.

Initially, I thought that this was an “ideal speed” issue and went through the process of resetting and adjusting the idle speed based on this excellent Holley Sniper EFI Idle Tuning video. I also called Holley Tech Support and they basically told me not to attempt “tuning” it myself but to take it to a mechanic! Unbelievable!

Even after going through these procedures a number of times over a number of months, the issue seemed to at times to get better, then come back, or even get worse. I could not figure out what variables were contributing to this. Was it outside temperatures? Was it wet or rain conditions? Was it when the AC was on? It seemed to be completely random.

Recently I changed my search criteria to focus not on the “idle speed”, but rather on the “throttle sticking” or “not throttling down” when released. This led me to find the Holley Forums where a user mentioned the need to wrap the secondaries spring one more turn to get the secondaries to close properly. I did some more searches and found this excellent YouTube video by Bcsader1. In it, he describes how he added an extra “wind” to the secondary throttle shaft spring because his secondaries were sticking and causing a condition very similar to what I was experiencing.

I am happy to report that after making this same change on my Holley Sniper EFI, the problem has vanished for at least the last two days! I will report back after driving it this way for some additional days and under various conditions, but so far I am cautiously optimistic that this has fixed the issue.

The video that made all the difference! Thank you Bcsader1! 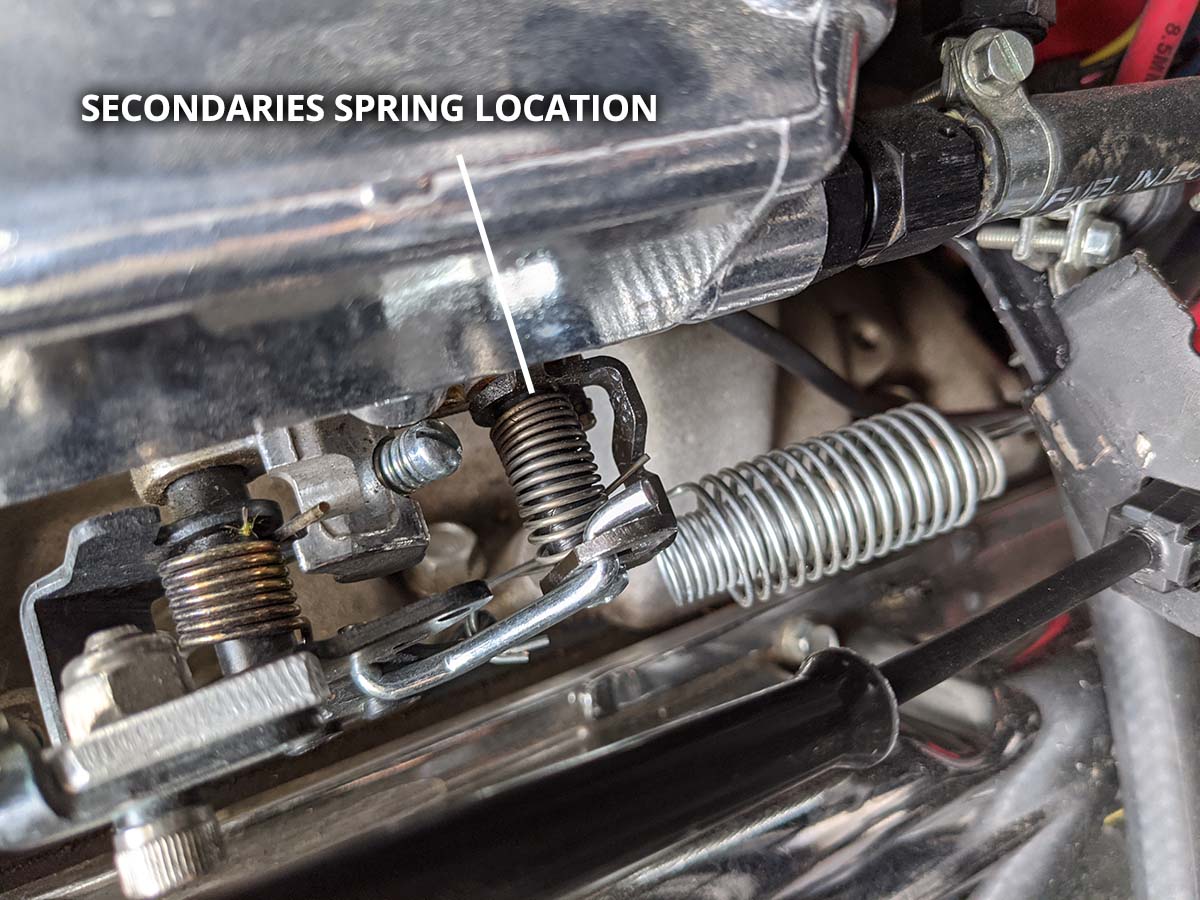 The location of my Holley Sniper EFI secondaries spring.

My secondaries spring after wrapping it one more turn as described in the video.

As an additional upgrade with the Holley Sniper EFI system, I decided to remove the stock cooling fan driven by the serpentine belt and pulley system, and install a Be Cool Qualifier Dual Electric Fan kit (BCI-75638) which is designed to mount easily on my Be Cool (BCI-60024) radiator. This dual 13″ fan kit runs on 44 amps, has 10 plastic blades per fan, and puts out 3,560 CFM.

It has performed flawlessly since it was installed in SEP 2020, with the Holley Sniper computer set to control when the fans go on and off. I noticed recently during the hotter summer weather that even though the Holley Sniper computer controller screen on my dash said both fans were “on”, that was not the case… only one is going on and off (Fan #2).

So, I tested the fans by wiring them directly to the battery and they both work fine. I then tested the #1 Fan relay and it also passed a test. So, I am trying to figure out where the problem may be.